Died and Gone to Kyrgyzstan

Heaven is a concept that I've always struggled with.  A paradise, a garden of eden, but also a place that can be all things to all believers.  I don't know anyone who could vividly describe what heaven is to them but I'm petty sure it's in Kyrgyzstan. When people say 'I've died and gone to heaven' after eating a particularly rich piece of chocolate cake or some other such thing, what they really mean is they've been transported to Kyrgyzstan.  They mightn't be aware of it, but believe me, the scenery that we've just cycled though, is out of this world, heaven-like, totally breath-taking and had I not seen it with my own eyes, it'd be hard to believe that such a place exists, so natural and unspoilt by us humans.  Instead of trying to contort the surroundings into a way that better serves people, or more usually, better serves more people and helps richer people get richer, here the people live in nature, with it and aware of it, taking what they need from it and no more, leaving it to continue giving and providing for generations to come.  The Kyrgyz nomads have it right.

**Photos are at the end this time instead of in amongst the text.  Feel free to scroll to the bottom to see them and skip the wordy bit!


I have to admit that when we crossed the border from Kazakhstan into Kyrgyzstan I was feeling a little blue.  Kazakhstan had taken us so completely by surprise.  We could never have imagined the level of hospitality that was shown to us there.  Nor did we anticipate the sense of calm the country would bring with it, which was only heightened after the chaotic and always-on style of life that we'd experienced in China.  I didn't think it possible that Kyrgyzstan could be as enjoyable a place as Kazakhstan, so it was with a bit of a heavy heart that I got my exit stamp from the Kazakhstan officials.

The border is only 30km or so from Bishkek, Kyrgyzstan's capital city, so you are in an urban area more or less immediately. It was a complete contrast for the rural crossing we made in Kazakhstan and immediately I convinced myself I had been right. Kyrgyzstan just wasn't going to live up to everything that Kazakhstan had been.

Fast forward a couple of weeks and I know realise that I couldn't have been more wrong.  It's true that Bishkek didn't exactly pull me in, I wasn't looking into work opportunities or planning my return but once we left the city, my thoughts on the country did a complete flip turn.  Immediately on leaving the city limits we were bombarded with warmth and smiles from the locals, with waves and shouts of hello, and with offers of food and board.  And again, nobody seemed to be looking for anything in return. It was all simply out of the goodness of their hearts.  It appears a free lunch does exist, in Central Asia at least.

At first the concept of strangers being so generous towards us was hard to accept.  Partly, I suppose, because for the most part these strangers have less than us.  Less in terms of material wealth and possessions anyway, but perhaps more in terms of community bonds and an understanding that material things don't bring happiness, people and interactions do.  I think locals often feel sorry for cycle tourists, deeming them to be so poor they must travel by bike, having no home and no jobs.  The idea that we've chosen to do this, not out of necessity but in search of adventure, seems to elude them for the most part.  But it doesn't matter, what little they have, they share. Not just with us, and the multitude of other cyclists we've met along the way who all have similar tales, but with anyone who crosses their path and seems to be in some way in need.  We've come to accept that they want nothing in return, that what they are showing us is a genuine generosity and altruism and instead of trying to pay them for their kindness, we should pay it forward and adopt their welcoming attitude towards strangers we met that we are in a position to help in some way.

It took us 9 days to cycle 670km between Bishkek and Osh, taking us up to over 3100m on two occasions.  The first climb began on the second of nine days.  We left the sleepy village of Sosnovka and immediately started climbing.  I dropped straight into my granny gear and stayed in it for the next 48km, a distance that took us nearly nine hours to cycle.  We met a German guy, Tom, on a recumbent, that day who we cycled with as far as Osh.  He's been on the road for 14 months now, the first 12 of which were with his wife and 5 year old daughter.  The climb was tough but thankfully there were only short sections where it was unbearably steep, forcing me to stop every 50 rotations of my pedals! For a while we were even following behind a small herd of horses and their herder.   It didn't take the burn out of my thighs or the ache out of my lungs but it provided a beautiful distraction and a desire to continue. Finally getting to the top that day, and looking back at the road snaking down the valley as far as the eye could see, brought with it a massive sense of achievement and even a tear or two as I  struggled to grasp where I was and how I'd got there.

At the top of that pass was a horrible tunnel that we hitched through.  It was dark, bumpy and narrow, and going through it high up in a truck cabin, all I could think was thank god we'd decided not to cycle it.  The truck driver brought us down the, far side too as a result of some miscommunication.  We'd only meant to go through the tunnel with him but, as it turned out, the light was fading quickly and there was nowhere to camp in the steep sided valley so it was just as well really.  About 20km later we were at the valley floor, and in the pitch darkness we motioned we'd like to get out.  He seemed a little confused but pulled over non the less.  We unloaded the bikes and panniers, said thanks a million and waved him off, before pushing the bikes about 50 meters in off the side of the road and throwing up the tent.   The next day we were face with another climb.  This time from 2200m, where we'd camped, to 3175m at the Ala-Bel Pass.  I stupidly thought it'd be easy because I didn't see any switch backs on the map, but I was wrong.  It was never very steep but it was continuous.  It took us five hours of cycling to cover the 70km to the top, or eight hours if you include breaks!  With that pass done I was sure it was all downhill to Osh.  How wrong I was.  The next two days were up and down, a lot.  Short sharp ups and an intense heat meant that sweat was dripping constantly off my head onto my knees.  These ups were followed by steep, unevenly surfaced downhills.  The kind of downhills that are almost more effort than the uphills.  You can't go too fast because of the pot holes and lumps and bumps, so by the end your hands hurt from pulling the breaks and you've got no momentum built up to help with the next uphill.  All the concentration needed to negotiate the bumps and holes in the road, combined with the heat and in inability to drink enough water all made for a, mentally, very tough day.  We were both feeling a bit wonky so when we passed a cafe we pulled in, ordered a litre of coke and a mountain of noodles, scoffed the lot and fell asleep for a couple of hours before taking off again.

Despite the hills, and the roads that often looked like a toffee bar that had melted in a child's pocket, only to be chucked in the fridge and solidified, with dips and troughs, lumps and bumps, creases and folds, I've never once felt like packing it all in.  With so much time to daydream on any given day,  I've often imagined myself to be cycling on some kind of Willy Wonka creation.  The road looks exactly like something Augustus Gloop would be only too eager to get his greedy mitts on. Its often soft, gooey texture makes it look like a giant liquorice bar!  Sometimes the lumps and bumps are so big it feels like I'm at the hurdy gurdies and combined with the mind-blowing scenery, it doesn't seem entirely impossible that I might in fact be in Willy Wonka's Chocolate Factory.

We've never cycled for nine days in a row before.  The most we'd done before this had been six days and after nine of the most gruelling days yet, including three punctures in my back tyre,  I can't tell you how good it felt to get to Osh, to know there was a bed and a shower waiting for me and a few days where I had nothing to do only eat and sleep. 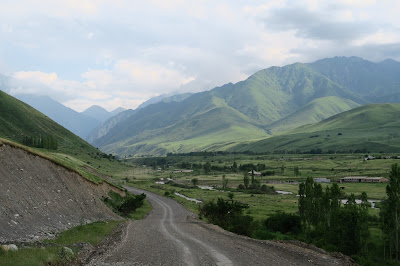 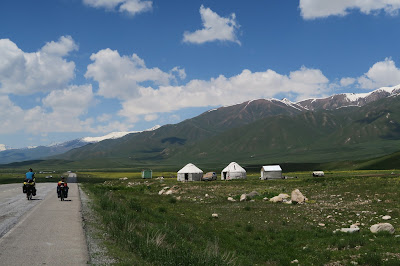 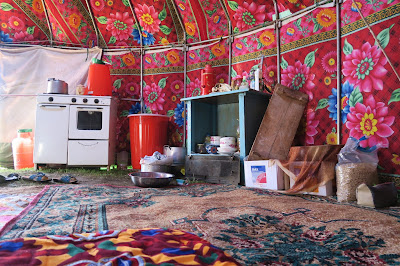 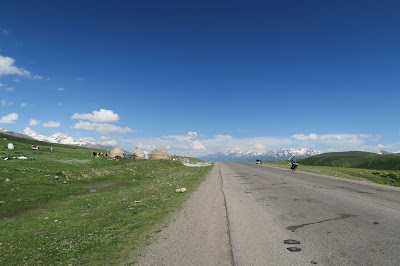 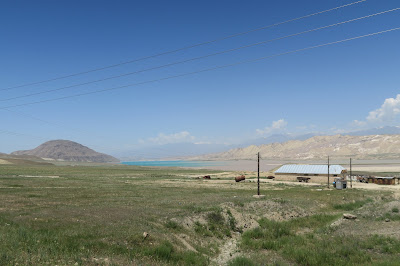 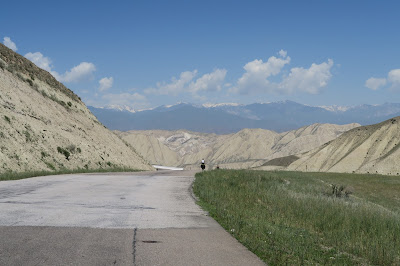 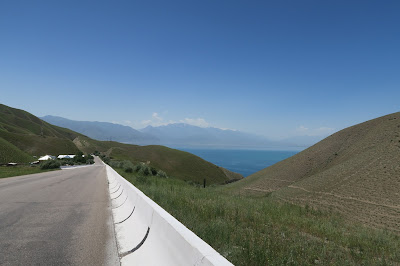 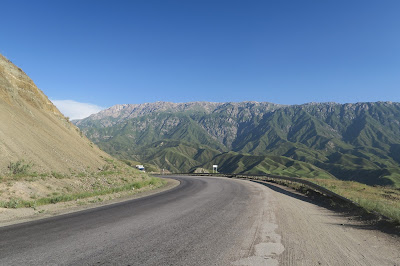 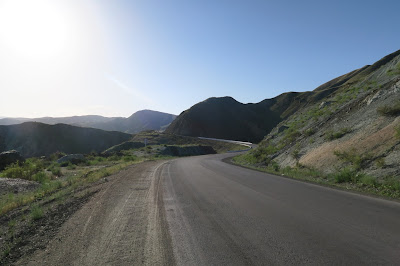 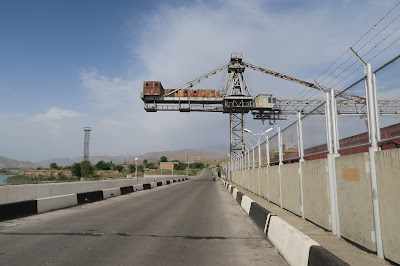 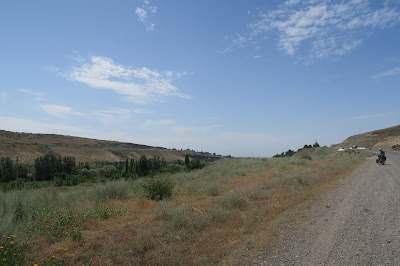 It's been a while since I've paid any attention to our current location map so when I looked at it the other day and zoomed out, I have to say I was quite impressed...we're almost half way home and we are also pretty much bang in the middle of the Eurasia landmass.  Check it out below ➤