A quick one minute video edit of our departure for Bike Back Home on February 24th. Away we gooooooo. Wooooohoooooo!

Posted by Unknown at 13:22 No comments: Links to this post

So today's the day.  Or at least it's the day before the day.  It's the day that we can say 'We're leaving tomorrow'.  It's very exciting.  It's hard to believe. I can't quite get my head around it.  I'm not even sure what to write except that it's here, it's finally here! After months of planning and years of talking about it, it's here, and we're off, tomorrow!
Posted by Unknown at 01:21 No comments: Links to this post

4 Days to Go and the Excitement is Palpable!

I got a text from the Korean Association for Children with Leukemia and Cancer (KACLC) the other day.  KACLC is the charity that I sent my hair too after it got chopped off in the pub on January 30th.  The text message was in Korean so I translated it.  Google translate is notorious for its dubious Korean-English translations and I think my text message may have suffered!  It translated the message as follows: "Guardian cherub! Thank you! Your hair has been well received in the Association."  I was pretty chuffed to be called a guardian cherub mind you!


The text came on the same day we went to Seoul to collect out passports from the Chinese Visa Agency.  We had everything crossed we'd be given the 90 days we'd asked for, and secretly pretty hopeful not having heard anything from them since the day we applied.  We had prepared ourselves for a long day of queuing and waiting but when we got there, there was no one else waiting so we were seen immediately.  Without any fuss the girl handed over our two passports and asked us to check them. 90 Days. Bingo! We handed over 55,000won each (about €40) for the privilege and went on our merry way! Delighted!


To celebrate the first real step towards hitting the road we decided to go for lunch and a few beers!  Before lunch I popped into Innisfree (a Korean cosmetics chain, similar to The Body Shop) to buy a few things and while I was in there I bumped into a guy, Sam, that we'd worked with in our first year here in Daejeon.  Given that we were in Seoul, a city with over 15 million people in it, and that we were over 140km away from where we'd met originally, it only added to the excitement of the day, feeling very much as if our time here in Korea has come full circle and that the timing to head off couldn't be more perfect.


As well as going to Seoul to collect our passports, this week has been spent furiously packing up our apartment.  Separating things into different groups: stuff to be given away; stuff to ship home; stuff to pack onto our bikes; stuff to sell and various miscellaneous piles when we just weren't sure what category to fit it into! The place looks like a bomb went off but it's pretty organised chaos, at least to our eyes it is!  We are planning on meeting a few friends tonight for some farewell drinks and general banter and we're hoping to have everything more or less done by then.


We spent the guts of yesterday afternoon in the post office, sending things back home (thanks Mum for providing the storage space!).  A friend with a car very kindly offered us a lift down, and thank god he did because I really don't know how we would've done it without him.


Nick's in the middle of plotting our route up to Incheon now as I type, and then after a bit of lunch, we'll hopefully get the last few things packed into our panniers.  Then we can switch off and enjoy the last couple of days without rushing around like mad lunatics.  Now that our departure date is so close, it's very hard to describe how we're feeling.  We're oscillation between disbelief and excitement  for the most part, with the odd moment of panic on my behalf when the thoughts of cycling up those Pamir mountains come to mind.  They are months off though, and I'll be fitter then and more able for them.  That's what I'm telling myself anyway!

Posted by Unknown at 07:08 No comments: Links to this post

I landed back in Korea on Thursday morning after a lovely few days in the sun!  After meeting Nick in central Seoul, we set about booking the flights we needed for the Chinese Visa Application.  After years of living here and being well used to the language and cultural barriers that exists in all tasks, no matter how trivial, we had ourselves well built up for a difficult day.  It turned out to be surprisingly easy and the first travel agency we tried was massively helpful and did exactly what we were asking without even charging us!  We were in and out with what we needed in under 15 minutes.

We went back to the hostel to go over our application documents to make sure everything was in order.  "Eh Nick, where are all the rest of the documents we need? Where's the white envelope clearly marked "Chinese Visa Application?"  "The what?" came his reply.  Disaster.

Luckily for us our neighbour Paul was at home and he has spare keys to our apartment.  He took the envelope to the bus station and put it on the next bus to Seoul, paying the driver for his efforts!  Panic averted.  At this, Nick let out a visible sigh of relief because otherwise it would have meant a pretty long day for him - two hours on the train back home, collect the envelope and then two hours back up to Seoul again.

It wasn't exactly the stress free, nice evening before our one year wedding anniversary, welcome home that I was anticipating.  (I may have thrown a bit of a strop!).  Anyway all's well that ends well and the next morning, after a few minor hiccups at the embassy our application was accepted and now we wait, and hope, that when we go to collect it on Thursday we'll have been granted a 90 day visa!

Oh, I just realised that I never posted any pictures of our Head Shave Event in Daejeon so here they are.... 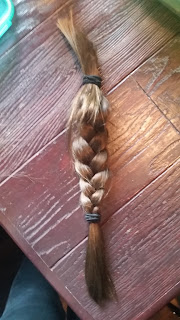 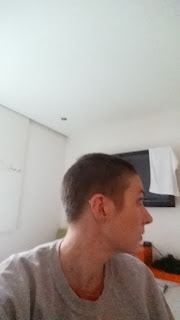 Posted by Unknown at 05:37 No comments: Links to this post

Cycling 150km in Minus Seven Degrees is a Terrible Idea

I had been building myself up to cycle from Hongseong to Daejeon for a while. Stef had deserted me and swanned off to the sunny shores of the Philippines for ten days with her friend Aisling who flew over from Ireland, so this seemed as good a time as any.

Without Stef's company and in a fit of desperate loneliness I committed myself to what I thought was about a 100 kilometer cycle. It ended up being just over 150 kilometers and almost 9 hours when taking into account my creative "shortcut" detours, crashes, angry dog evasion and honestly, just getting lost! Also the entire journey was almost entirely in sub zero temperatures! What an idiot!

Read more »
Posted by Unknown at 11:28 No comments: Links to this post

This is just a quick review of the weekend and the fundraiser that we held in Travelers Bar in Daejeon. We raised roughly ₩1,300,000 or around €980, which includes a very generous commitment of ₩500,000 won from the lovely people at the Irish Association of Korea.

We are now over one tenth of the way to our goal of €30,000 thanks to the enormous generosity of all you lovely folks out there. We've been truly overwhelmed with the support that we've received so far in undertaking this adventure and charity fundraiser. Now, there are only 21 days to go before we take off. We still have lots of organising and planning to do but it's all exciting and the support we are getting is only turbo charging that excitement!

Cheers everyone :)
P.S. Pictures of Stef's head to come!

Posted by Unknown at 04:15 No comments: Links to this post