Inappropriate saddle positions, gammy knees, heavily dusted eyeballs, sudden and explosive meltdowns over melted chocolate, Delhi belly, – well not really but Xuzhuanglaozhaowanghe belly just doesn’t have the same ring to it – freezing temperatures, and a general waft of combined stinkiness have all been part of the experience up until now.

But what an experience it has been so far!


Two weeks ago we were in heavily farmed and industrialised areas, crammed with people, bikes, electric bikes, electric cars, tractors, three wheelers, vans, trucks, diggers, army vehicles, busses and dangerously over-packed articulated lorries. Today, we find ourselves on the edge of the Tengger desert after having cycled for three days through the spectacular Liupan mountain range.


With a few welcome exceptions of relatively quiet side roads, which were slow going due to the terrain the journey quite suddenly went, after Xi’an, from hectic, dusty and noisy to calm, clear and peaceful. The first 1,600km were, although interesting and at times quite beautiful, a complete attack on the senses and we are both delighted to be on the brink of what looks like a long ride through the desert after having spent a few days in the mountains.

Throughout the journey to date, a few things have stood out to us: every river we have crossed, besides the Yellow river, has been bone dry and used as a rubbish dump; religious symbolism began to become apparent a hundred or so kilometres before Xi’an, and quite quickly after Xi’an, in the provinces of Shanxi, Gansu and Ningxia.  In even the smallest of villages we have seen 3-4, apparently quite recently built, mosques, and in the cities they are rarely out of sight.

As we travelled further into Ningxia, towards Zhongwei (where I’m writing this from) the Mosques seem to have mostly disappeared.  Religious symbolism became more apparent at the same time as the ubiquitous red scarfs/ribbons – which were everywhere for the first 1,300km or so – became less obvious. Then the same happened in reverse as we arrived into Zhongwei.

Many of the regions in central, northern and western areas are autonomous regions within China and from what we have seen the cultures vary slowly but quite noticeably. Although it might vary more quickly if we were in a car!

On a side note, I think that the scarfs are part of the “Young Pioneers” and show allegiance to the communist party while also commemorating those who died in the Chinese Civil war which ended in 1949. After the members turn 14 and move on from the “Young Pioneers” the scarfs seem to appear on anything from car hubs to dogs, Stef also read that they are symbols of luck.

We have passed many beautiful and fascinating places and seen and met many wonderful and interesting people so far on our journey. Stef has had babies thrown into her arms for photo opps - someone tried with me but I think the stink made the kid cry and he ran off. We've passed amazing architecture and seen some brilliant examples of cultural mores. 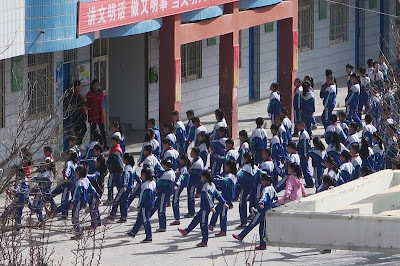 It really is a ludicrously big country, and to talk of having been to “China” or having met a “Chinese” person seems to become meaningless when confronted with the enormity of the place and the apparent differences in cultures and belief systems.

Throughout our journey the shape of peoples faces and the language have been noticeably changing. Last week we passed some road signs written in Arabic. And, people are speaking Uighur now which is quite distinct from Mandarin.

After having been surrounded by so many people we're looking forward to tomorrow. Like Jim Morrison hallucinating about riding bikes with Indians, into the desert we go!

Although, Stef, being quite tired from yesterday, already thinks she’s a floating potato angel! 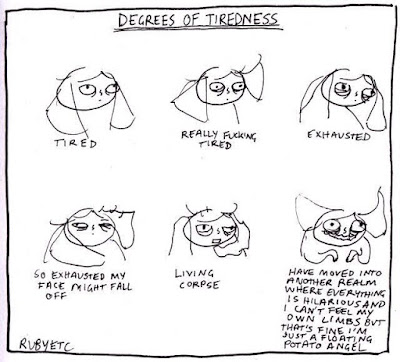