We haven't actually had any Turkish Delight yet, although we do hear very good things about it, but it was some delight crossing over the border from Iran and shedding that headscarf let me tell you.  There was a bin right next to the X-Ray machine that our bikes and bags had to go through which I gladly dumped my scarf into and had a little celebratory chuckle to myself.  I waited until I was outside and away from the border guards to shed the rest.  What a welcome to Turkey it was!


We've been here almost two weeks now and although the weather here is cooler, and significantly less humid, than in Iran, the cycling has been tougher than anticipated.  I suppose a quick glance at the topography of the country would have had me a bit more prepared for the mountainous terrain, but we don't usually do much of that, preferring to just get up and go and take it as it comes.

So what's Turkey been like? Beautiful.  It's been beautiful.  The weather being that bit cooler has helped, as has the fact that the roads are very quiet.  In Iran we met a Swiss cyclist who told us Turkey's road were better than Iran's, and much quieter.  We looked at each other doubtfully.  How could that possibly be the case, Iran has great roads.  But it's true.  The roads are great and they are really quiet.  We've been on main roads and motorways almost the whole time but with hardly any traffic and a huge hard shoulder they haven't felt like main roads.  They also don't have big barriers down the sides and in the middle of the roads, which gives you a much greater sense of space and feeling of freedom as you pedal along.  There's no separation between you and the surrounding countryside.  It's such a small thing but it's something that we've noticed makes such a big difference to your appreciation of where you are.  Some of the scenery we've passed through here in Turkey has been similar to some of the Chinese landscapes, especially those in the Western province of Xinjiang, but with one major difference, and that's the safety barriers and fences in China.  They were endless and totally impenetrable and gave us a real sense of being hemmed in but it's just not like that here.

The first town we came to in Turkey,  Doğubeyazit, was noticeably much poorer and much edgier than any we'd been through in Iran.  There were more people of every kind out on the streets, buying and selling, hawking, hustling and bustling.  There were kids roaming about, some playing, some working, some annoying passersby.  There was lots of rubbish and quite a lot of the buildings and shop fronts were pretty dilapidated and ramshackled.  There were much more women out and about than there had been in Iran, and although still quite conservatively dressed, there were plenty without a head covering of any kind.


The east of the country is very heavily militarised, the most militarised place I've ever travelled through actually, Nick too.  Huge, fortified, military compounds with big tall watch towers, heavily armed soldiers and huge tanks and fortified vehicles, the likes of which I've only ever seen in films.  In saying all that, every check point we came to we got big waves and hellos.  We cycled down a small road leading into a town that was blocked at the end by a huge crowd dispersal water tank type thing.  The plain-clothes soldier manning it jumped out, put his handgun into his jeans pocket and asked us all about ourselves, saying it was his dream to one day cycle around the world too.  So although there's such a heavy military presence here, it's completely un-intimidating.

A primarily muslim country, Turkey is mostly comprised of Sunni muslims, unlike Iran which is predominately Shia.  I don't know if that's the reason, but the mosques here are much simpler in design, much less imposing and have totally differently shaped minarets.  There are none of the ornately decorated onion domes of Iran, and instead the minarets are fairly tale like, tall and thin, and look like something you might find Rapunzel in!


It seems to be a very nationalistic country too.  There are Turkish flags flying everywhere.  Out of apartment windows, on cars and trucks and from the minarets of mosques.  Little hand-sized ones, and massive big ones the size of tennis courts, hanging over the fronts of big buildings.  I don't know if this is a recent thing, given the recent coup attempt, maybe it is or maybe they all just really love their flag!


The food has been delicious, continuing on from Iran.  Lots of delicious fresh cheeses, honey to beat the band, yummy fresh crusty bread, olives like you've never tasted, as well as all manner of tasty things that we stumble upon by accident, only to never have again because we forget the name of it as soon as we're told!

We continue to be bowled over and blown away by the generosity shown to us on a daily basis.  It's not done in quite such an obvious way as in Iran, where not a day went by where we didn't receive something from somebody (a piece of fruit, a whole meal, somewhere to stay) but it continues nonetheless.  Big smiles, lots of curious faces, waves a plenty and as warm a welcome as you could ever hope for.  We've had two offers of free accommodation since we've been here.  Both by truck drivers offering to let us sleep in their cabins.  The first we refused because it was only 10am but the second we gladly accepted, although in hindsight it was a little cramped with the two of us and the driver, Idris, all sleeping in the cabin.  It wasn't the best night's sleep but it was an experience, and the omelette that Idris whipped up for us in the morning was very much appreciated. We said our thank you's, took the obligatory photo together and went on our way.

We're in a small town called Göreme now.  It's in Cappodocia and it's the most fantastically magical place I've every been to.  The whole region is made up of these odd looking stacks and rock formations.  They are really old volcanic eruptions apparently, that have been weathered by rain and wind and people have been living in them for centuries.  The place we're staying in, Fairy Chimney Inn, is totally idyllic.  It's up the hill from the town, so away from any of the hustle and bustle, and it's just about the most peaceful place you can imagine.  We have the place virtually to ourselves (one of the great things, from our point of view, about all the recent trouble in Turkey is the lack of tourists.  It's pretty awful for all the business owners though), and the hot air balloons that Cappadocia is so famous for, glide right past our windows in the morning.  It's been the most relaxing place we've stopped yet and with our batteries now well and truly recharged, we're both ready to hit the road again tomorrow, full of beans to meet the parentals who are currently driving hell for leather out from Ireland to meet us! 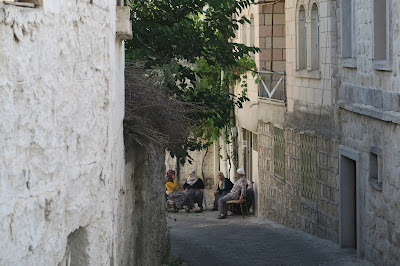 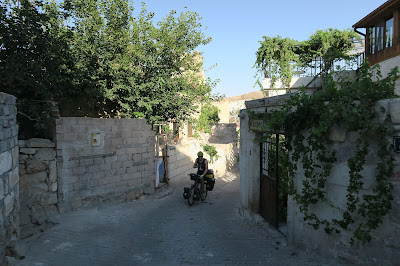