Saturday was spent in somewhat of a delicate state after indulging in one or two (too many) cocktails the night before.  We found the most unlikely of little bars, run by two guys who studied cocktail making (mixology?!) in Shanghai for 5 years before coming back home to Urumqi and opening this little gem of a place.  I’ve never really been one for cocktails before, not really seeing the appeal of overly sweet, artificially fruity, expensive drinks in small glasses but after being in this bar, I’m a convert. I think I just hadn’t ever had a good one before! These guys were artists and took their trade very seriously.  We sat at the bar and I watched them, fascinated, for the evening.  I think the reason it was such a great place was because the boys clearly loved what they do, and it showed.

Anyway, as I was saying, Saturday was spent mostly on the couch watching TV.  The dad of the house, who’s name we can’t pronounce and who we call ‘Pops’, came home about 7pm with fresh bread and a bag of green chilli peppers and proceeded to whip up a meal for us.  Charred peppers, pieces of marinated pork that we’d had the night before and big chunks of fresh bread. So simple, but so tasty.  Then out came the tea.  He told us that Chinese people love tea, but he especially loves tea.  He took out a huge big tin that was full of all kinds of different teas; black tea, red tea, green tea and who knows what else.  Loose leaves, but vacuum packed to preserve freshness and all in one-cup size portions.  We tasted about 6 different ones.  Our favorites were called ‘Golden Eyebrow’ and ‘Big Red Cloak’!


We’ve really fallen on our feet with this family.  They are constantly telling us to make ourselves at home and to relax.  They make us brekkie and dinner and tell us to eat more and to relax and recover.  Meal times are simple affairs.  The food is put on one or two plates in the centre of the table and everyone just digs in.  It’s all very informal.  Food that doesn’t get eaten will reappear at the next meal.  Food is food, and isn’t separated into breakfast foods or dinner foods.  Sweet and savory are all served together.  Eat as much as you want to, wash it down with some tea and leave the table.  They won’t let us help with the dishes or with preparing the food, we are honored guests!

They are also a very green conscious family.  The hot water comes from solar panels on the roof.  No sun means no hot water which takes a bit of adjustment when you’re used to hot water on demand but quite quickly seems a much better way of living.  They recycle everything and create as little waste as they can.  When the kettle is boiled it is filled up to the top and then the excess is put into a thermos flask for later.  Such small, simple little things but they highlight just how wasteful we westerners are when it comes to energy and water use.

It’s not just this family that’s been looking after us while we've been here though!  We’ve had another one take us under their wings too.  A Chinese guy called Can who's from Urumqi, and who studied in UCD and stayed as a lodger with a friend of my aunt’s, got wind of our arrival.  He now lives and works in Shanghai but when his family heard we were in Urumqi they fell over themselves to look after us.  His dad, with yet another unpronounceable name, came to meet us one day last week in a city centre café.   He didn’t have much English but, as with our host family, the translator on our phones worked a charm.  He took us out for lunch where he ordered three different kinds of noodle dishes as well as skewers of grilled lamb.  He wouldn’t hear of it when we tried to pay.  Next, he took us to a park in the city centre for a walk and a spin up the city’s big wheel.  Again, he wouldn’t let us pay and insisted on buying ice-creams for the big wheel ride!  Then we went to his mother’s house, where we watched some Chinese TV and ate some kind of cheese before we went to join 8 other family members for a banquet of a meal in a gorgeous restaurant.  They treated us like part of the family, welcoming us as long lost relatives back into the bosom of their family.  They toasted us and wished us well on the rest of out trip, making us promise to ring if we had any problems.  The hospitality we’ve been shown at every stage has been unbelievable and helps to remind us that people all over the world just want the same thing, to live a happy, peaceful life. 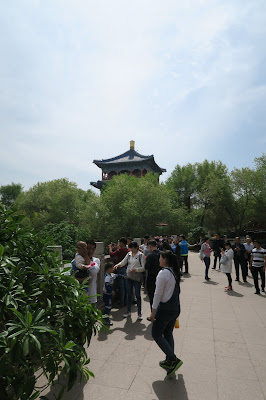 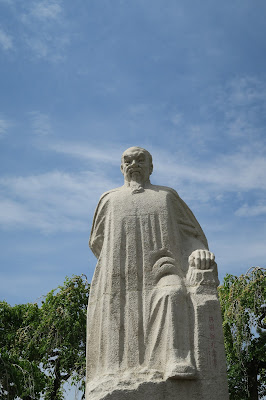 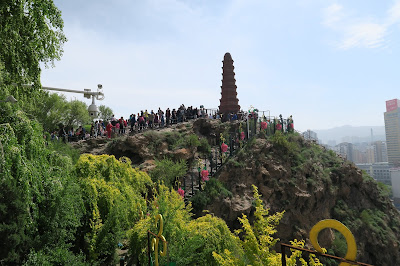 Last night, our host family cooked dinner for us, again.  They really have been amazing, going so far above and beyond what's expected from an Airbnb host.  Their English is limited but that doesn't stop them from saying 'Eat More' constantly when it's meal times.  Last night they told us to eat so that we won't be home sick!  After dinner, which was as delicious as ever, they asked did we want to go and see the Tian Shan mountains.  We weren't entirely sure if they mean to go to a view point or for a walk or what but we said yes, pulled on our shoes and followed them out to the car. 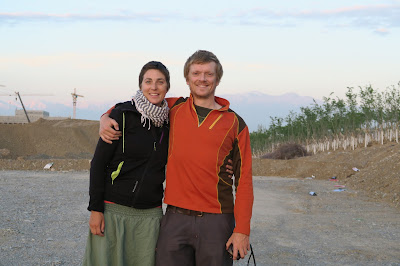 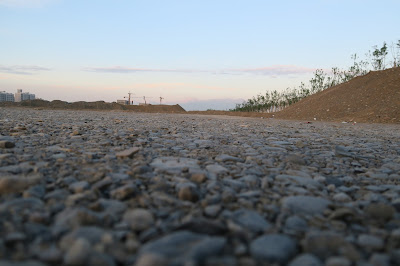 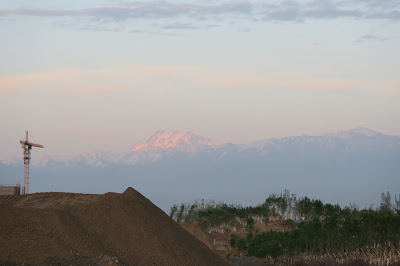 We’ve been here in Urumqi a week now and I’ve almost forgotten how we got here.  Did we really cycle? Our bikes have been locked away down in the basement the whole time we’ve been here so we haven’t even seen them.  We’ve been getting buses about the city, going out for meals, drinking coffees, eating ice-creams, wandering through parks and markets, reading books, watching tv.  It’s been such a lovely break.  I only hope that my body doesn’t go into shock when we get back on the bikes on Thursday and I ask it to once more pedal kilometer after kilometer, day after day! 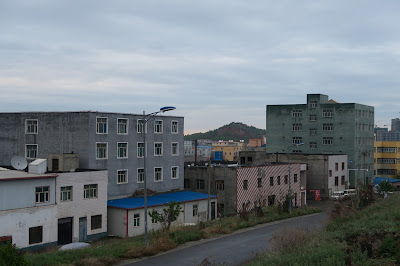